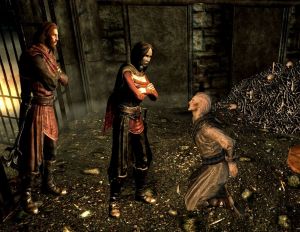 Serana stood over Vingalmo, who knelt in the prison cell with hands bound tightly behind his back, impatiently willing him to answer her questions. She had waited for days while he had lain unconscious, wondering if he would ever even recover from the trauma of a trip to Coldharbour. And now that he was finally awake, he wasn’t cooperating. Orthjolf stood by, his hands balled into fists, just itching for the chance to hurt the Altmer.

END_OF_DOCUMENT_TOKEN_TO_BE_REPLACED 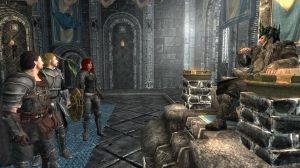 Standing in the great hall of the Palace of the Kings with Rowan and Ben, Dolff gaped at his father in shock. Ulfric had aged fifteen years, practically overnight. His hair, which had been silvery and shiny, was now a dull, creamy white. His skin was ashen and grayish, and the lines and age spots on his face were much more pronounced. He had lost weight, and his flesh seemed hang off his bones. Even his eyes, which had always glimmered with spirit and intelligence, were milky and dim, peering back as if he didn’t recognize him. The Jagged Crown didn’t so much rest on his head as grip it in a stranglehold.

END_OF_DOCUMENT_TOKEN_TO_BE_REPLACED

Coranil trudged up a snowy hill with an arctic blast hitting him in the face, but he endured. It would only be a few more minutes; Nightcaller Temple was already in sight. It was late at night, but the moons reflecting off the snow helped light his way.

The building he was approaching had once housed a temple of Vaermina, but for the past twenty or twenty-five years, it was used as a temple of Mara. According to Coranil’s order, however, the priests of Mara were driven out or killed and the place was now a Thalmor installation. He could see why they had picked it. It was close to the shore, providing easy access for boats, but the elevation of the hill was high enough that a lookout would have an unimpeded view for miles. It was close to Dawnstar, which might have been a drawback, if not for events that had occurred some years back involving an artifact created by Vaermina, in which the whole town was plagued by horrible nightmares until the artifact was destroyed. Coranil imagined that none of the townspeople dared go near the temple these days. By the lack of footprints in the week-old snow, Coranil surmised that he was correct in his assumption. Just as with other Thalmor locations, the outside looked deserted. There were a few empty barrels and a cart with a broken wheel in the yard, but there was no evidence to indicate that anyone inhabited the temple at all.

END_OF_DOCUMENT_TOKEN_TO_BE_REPLACED 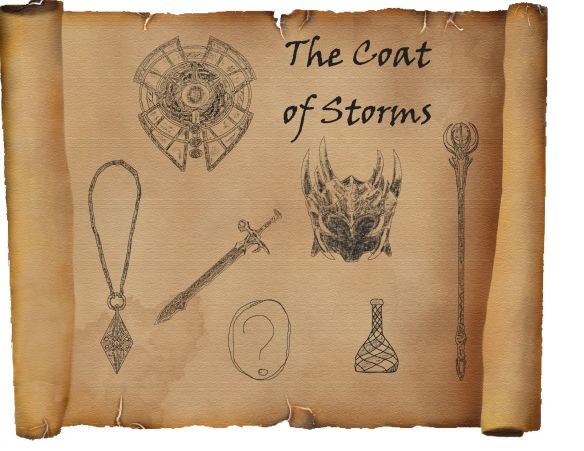 After stopping in Solitude the next night, Ben, Coranil, Rowan, and Dolff headed back to Windhelm. The trip seemed to take forever, mostly because it was so quiet. Ben tried to engage the others in conversation, but aside from Coranil answering his many questions about the Thalmor and his past, they barely spoke. Relations between Rowan and Dolff were colder than the winds on the Throat of the World, and Ben had no idea what had happened. Well, he had some idea. He thought maybe they had fought because Dolff was jealous of Rowan’s dotage on Coranil, but they weren’t talking about it, so he could only speculate.

END_OF_DOCUMENT_TOKEN_TO_BE_REPLACED 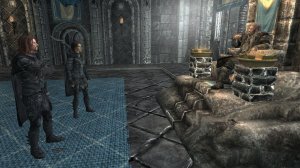 Rowan and Ben arrived in Riften a couple of days later and gave Selene the vial of snow. They left the next morning to go back to Whiterun, and Selene and Brynjolf headed for Windhelm. She called once again on Odahviing, who, as always, was happy to give them a ride; and they arrived in Skyrim’s capital city in a few hours.

Ulfric had stepped up security. Extra guards patrolled the streets, and some of them who didn’t recognize Selene and Brynjolf glared at them suspiciously. Selene could sense her husband’s unease as they approached the Palace of the Kings, but it wasn’t the extra guard that made him uncomfortable. Although he respected Ulfric as High King, his animosity toward the man had never waned. He hated him with a passion, and Ulfric was none too fond of him, either. Still, they were men of integrity in their own way, and they tolerated each other enough to work together when necessary.