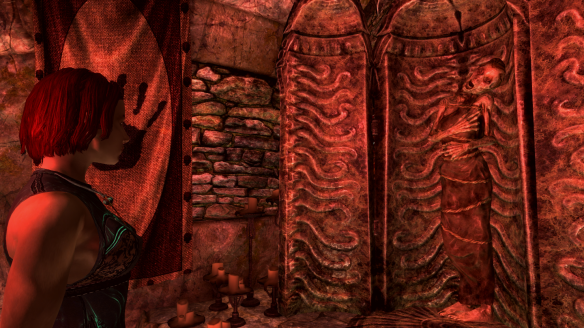 Amelia was still having second thoughts and regrets when they ported to the Falkreath Sanctuary. She had killed innocents before; it was part of the job. Why did Tova Shatter-Shield’s murder bother her so? For the first time since Speaker Terenus had approached her years ago, Amelia wondered if she might be doing the wrong thing. She was a vampire; killing was what she did. And she was a damn good assassin. But could she ever hope for redemption? She had accepted that she would go to the void upon death, but what if she would rather go to Dibella’s realm instead? Dibella had once told Amelia She loved her. Did She still love her, or had She abandoned her when she had joined the Brotherhood? And if she did stay with the Brotherhood, what if she choked?