This is an embellished screenshot by my friend Jowain on DA (jowain.deviantart.com). He has a vision of Miraak that I have never seen. This particular work shows a humanity in him that few, if any, would ever see. Enjoy, and be sure to check out his other work. Not only is he a fan of Miraak, but he has some memorable vampires, and his deep sensitivity has allowed him to write some very touching pieces. 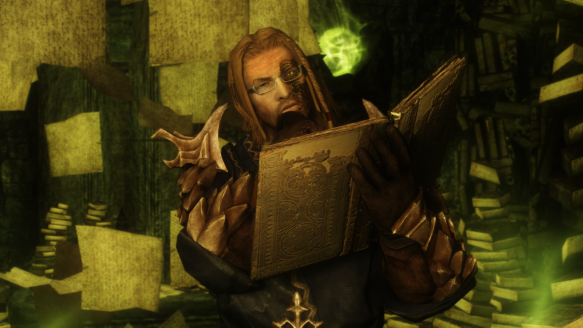 Selene opened her eyes slowly the next morning in no rush to wake up. She lay silently, listening to Brynjolf’s soft snoring and looking at his sweet face. The stress of their travels and the constant battles had worn on him, and a few lines were starting to form around his eyes. Not that it mattered; he was still the most beautiful man she’d ever seen.

END_OF_DOCUMENT_TOKEN_TO_BE_REPLACED 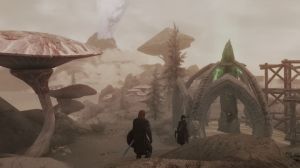 Selene and Brynjolf spent the night in the Greathall as guests of Fanari Strong-Voice. A few of the villagers came in to introduce themselves, thank Selene and Brynjolf, and hear their story. They were fascinated with the Dragonborn and her defeat of Alduin, as well as the quest she and Brynjolf were currently on. The Skaal were unlike any Nords Selene had ever met. Frea had talked about how they lived with the land instead of from it, and talking with the others, Selene finally began to understand what she had meant. They took only what they needed from the land and gave back whenever they could. They were as likely to plant a tree as to cut one down, and they made a point of thanking the All-Maker for everything they consumed, even water.

END_OF_DOCUMENT_TOKEN_TO_BE_REPLACED

Selene lay very still, silent so as not to wake Brynjolf, with her hand on her stomach, waiting. She had awakened to a fluttering in her belly that hadn’t felt like a normal hunger pang, and she was convinced she had felt the baby moving. Brynjolf stirred an hour later, sat up in his bedroll and rubbed his eyes.

END_OF_DOCUMENT_TOKEN_TO_BE_REPLACED 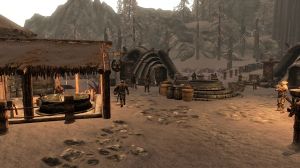 Selene spent the entire half-day trip to Raven Rock vomiting into the sea. When land appeared on the horizon, she thanked Kynareth for small favors, but just because they were near land didn’t mean they were stopping. They continued on for another hour past miles of ash-covered shoreline. To the south, the Red Mountain puffed away, continually spewing smoke and ash into the gray sky. Occasionally they saw creatures like none Selene had ever seen floating above the ground or water. They were the size of a house, covered with a something like a tortoise shell that came to a long point at the back, no visible heads, and six long, blue tentacles that hung toward the ground. They bobbed and drifted, thrumming softly like a heartbeat while their underside pulsed with light.