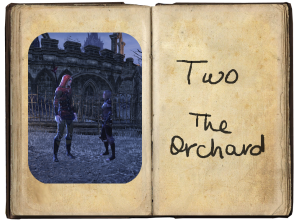 After a few days of feeling cold and alone, I finally said yes to the vampire. I think I’m going to learn a lot from my new friend. His name is Vallanil Stormbringer, and he and his coven, who reside in a region called the Orchard, have taken me under their protection. In three days, I haven’t been disturbed by any of Coldharbour’s creatures, and no one has suggested or even joked about biting me. Many of the Orchard’s vampires chose to live in Coldharbour instead of Nirn, mostly because there is less of a threat to their kind here. It sounds crazy, but I guess there’s a sort of strange logic to it. They were able to come and go as they pleased, and they would go to Tamriel to feed, socialize with others, or even adventure like I do.

Some of them were prisoners, however, exiled here for one reason or another. Vallanil, for instance. He made a deal with Molag Bal to bring some artifact to Coldharbour, and once he got here, the Daedric Prince wouldn’t let him leave. I still don’t get how the other vampires could leave and he couldn’t, probably some sort of curse or spell. But they would bring bottled blood back for him and the other prisoners so they could feed.

Even though he was treated well, imprisonment was really terrible for Vallanil, who was separated from his beloved wife. “We were only married a few weeks before I came to Coldharbour,” he said. “I had only just turned her, and I left her alone with the hunger of a new vampire, the spirit of a warrior, and no way to reconcile the two.”

He chuckled. “Oh, she was very dangerous before I turned her; but yes, if she loses control, she could wreak incredible havoc.” His eyes glazed over. “But it’s more than that. I miss her. So much.”

“Then we have to find a way to get you out of here. Maybe you can somehow leave with me.”

“Unfortunately, there’s more to it than that as well.”

That’s when he told me that none of them could leave. He said one of the vampires in the coven had betrayed them. Apparently it was very frustrating to Molag Bal that the vampires could come and go as they pleased and he couldn’t do anything about it. I find it astounding that it’s his realm and there are still things he can’t control, but Vallanil says it’s not all that uncommon. Coldharbour is a big place, after all. Anyway, this other vampire was a prisoner here like Vallanil, and he made a deal with the big guy to get out. He cast a spell using four dark Welkynd stones, and the spell trapped all the Orchard’s vampires here. While they can leave the Orchard on a limited basis, they can’t venture far and they can’t approach the stones or the spell will do . . . well, Vallanil wouldn’t tell me that. Just that it was something terrible. They can’t leave, so they can’t feed. It’s been months. I can’t imagine hunger like that.

And yet they leave me alone. Maybe it’s because Vallanil has quite a bit of power here. He is way up in the hierarchy of the Orchard, second only to the Blood Matron, who serves as leader and warden. We don’t see her much; she stays closed away in her chambers, and the vampires all defer to Vallanil.

Walking around the Orchard, I can see the Welkynd stones. They’re floating above braziers just at the perimeter of the area, guarded by Harvesters—gigantic snake women who send out these orbs that suck the life out of their opponents and take it for themselves. They’re just different kinds of vampires, really. They don’t bother anybody as long as they don’t go toward the stones, but Vallanil said that if anybody tried it, the Harvesters would attack them all, not just the ones who approached the stones. Not to mention that if they actually did get through, their proximity to the stones would trigger the spell.

“Gwenyth, do you see how large those Harvesters are? You’re less than half their size, armed only with daggers, and you don’t have the magic to defeat them.”

“I have magic. I told you I’m a Nightblade.”

“And you’re an excellent fighter, but your blades alone won’t be enough, even if you managed to sneak up on them, and they’re powerful enough to easily resist any siphoning magic you have. Their claws are like razors, and they would drain your life faster than you can imagine and then rip you to shreds. I can’t allow you to even attempt such a feat because none of us would be able to come to your aid.”

“But there must be something I can do.”

I lie here now on my bedroll, feeling helpless. When Vallanil talks about his wife, he looks so sad and hopeless. It’s heartbreaking. It makes me think of Mokurai. It’s been so long since I saw him last, and now I’m starting to despair if I’ll ever see him again. I’ve gone as much as a year without going back to Elden Root before, so he is probably merrily living his life, hunting and fighting as usual, figuring I’ll come home at some point. I wonder how long it will be before he starts to worry.

I was right when I thought I would learn a lot from Vallanil. It has always been his philosophy that vampires don’t have to be the feral monsters they’re made out to be, and that the majority of them really aren’t that way. They’re predators, yes, and he does concede that many of them could be considered evil; but they are highly intelligent, deep feelers, and protective of each other. Only bloodfiends are feral, and though it is said that is the fate of all vampires, no one in the Orchard ever knew a vampire who turned into a bloodfiend with just a normal existence. There is some worry now that the Orchard vampires could eventually turn into bloodfiends if they go without feeding long enough, but Vallanil says such a possibility won’t exist for quite some time.

I’ve learned from the other vampires as well. The Orchard coven is a family, and they guard each other fiercely against the terrors of Coldharbour. Although my family always been close, there has never been the intimacy that these vampires share with each other. It’s very much akin to what I have with Rai, except it’s not one-to-one; they all share it. I find this even more attractive than the concept of biting and drinking blood. I’ve even begun to consider asking Vallanil to turn me.

After several weeks of deliberation with myself, I finally asked Vallanil to turn me, and he said no.

“Why not?” I asked, sounding for all the world like a youngster denied a sweet.

“Don’t misunderstand me, Gwenyth. I would love to have you as a childe. But if I turned you, you would be confined to Coldharbour like the rest of us. We talk of our unsated hunger, but it would be worlds worse for a new vampire. Your suffering would be immeasurable, and you might become a bloodfiend much sooner than the rest of us.”

He shook his head. “You’re charmed by what you see here, little one. But why would you want to spend an eternity in Coldharbour?”

“Stop calling me ‘little one.’”

He’s right, I guess. Although they maintain control, I can see how badly the vampires suffer. But maybe I can find a way to break the spell, and then he can turn me.

If I was better able to keep track of the days and nights, I would estimate I’ve been in Coldharbour just about five months. It’s finally happened—Vallanil has come up with a spell that will open a portal, allowing me to leave. At least we think it will allow me to leave, and I do hope so. I love Vallanil dearly, and I’m fond of most of the other vampires as well, but I’m ready to go home, vampire or not. I miss Rai so much, but it’s not just him. I miss the moons, the stars, the warmth of the sun. I miss rotmeth, bacon, hunting, even stealing.

This morning, as I was preparing to leave, Vallanil came in and handed me a sealed letter. “I want you to try to find my wife,” he said.

“How am I supposed to do that?”

“You can start by going to my castle in Rivenspire. Knowing her, I doubt she has stayed there. She has probably begun to travel again. But we have retainers, friends, even the townspeople know us. Any of them might be able to point you in the right direction.”

His face fell. “You’re right, of course. It was wrong of me to even ask this of you.”

“Oh, give me that.” I yanked the letter out of his hand. “Did you really think difficult and dangerous would stop me? I’ll find her, Vallanil.”

“The good news is you don’t have to travel to High Rock on foot. There is a mage in the Auridon Mages Guild who is a portal master. His name is Sandril, and he’s a good friend. He can get you where you need to go, and get you back again.”

Portals again. Maybe I won’t ever learn. But with one last hug for Vallanil Stormbringer, I’m ready to step through the one he is about to open for me.