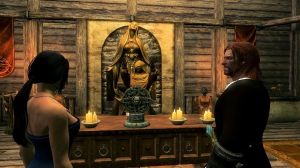 Selene is married to Brynjolf, high-ranking member of the Thieves Guild. When Selene first arrived in Riften, Brynjolf bought her dinner, then picked her pocket. When she realized what he’d done, she turned around and picked his. She awoke in her room the next morning to find he had snuck in and stolen all of her gear. It was instant love. In the marketplace, she warned him against robbing a stranger and kissed him on the cheek. He told her later that he’d had his fortune told by Olava in Whiterun before they had met. Olava had said a dark-haired woman with eyes the color of sapphires would kiss him on that cheek, and that woman would be the greatest love of his life.

They took things slow, teasing and flirting for weeks before finally admitting their love and sealing the deal. Brynjolf found out she was a werewolf during the ceremony to make them Nightingales, and he almost broke up with her—not because she was a werewolf but because she hadn’t told him. He got over his anger, though, and Selene promised never to lie to him again.

They spent weeks together, first fighting Mercer and taking the Skeleton Key to the Twilight Sepulcher, then traipsing all over Skyrim while searching for all the wealth Mercer had taken from the Guild over the years. It was between two of these trips that Brynjolf asked Selene to marry him. They wed in the temple of Mara, with the entire Thieves Guild, several Companions, and half of the city of Riften in attendance. Selene wore a strapless gown given to her as a gift by Jarl Elisif the Fair of Solitude. It was a lovely ceremony, and the party in the Flagon afterward was epic.

Bryn still calls her “lass,” but he has also taken to calling her “wife.” They don’t fight much, but when they do, they raise the roof. They also raise the roof when they make love. Their relationship is one of passion but also of friendship, partnership. They haven’t really discussed children yet because they’ve only been married a couple of months. Plus, in their line of work—and the fact that Selene is the Dragonborn—children aren’t a good idea at the moment. Selene does have a special affection for Sofie, the little girl who sells flowers in Windhelm. Whenever she stops by, she’ll buy up all of Sofie’s flowers. If and when her life settles down, Selene might consider adopting her.